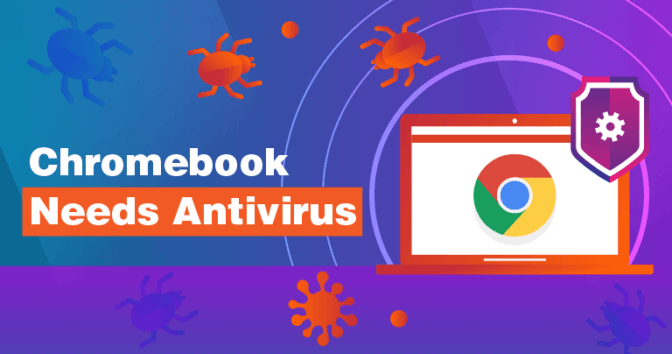 BY: Eric C.
Tags: Cybersecurity
Follow the SafetyDetective blog daily as our tech experts keep you up-to-date on antivirus software
0
0

Google’s Chromebook laptops are popular due to their lightning-fast performance and the enormous selection of apps available for them to use. While you might believe that your device is ready to use out-of-the-box, without an antivirus to keep it safe, it will only be fit for the trash heap in a matter of months.

Like Android and Linux, the “Chromebooks don’t need antiviruses” myth is dying hard. Any additional protection you can add to your Chromebook is a sensible purchase.

Chromebook OS is a relatively unique operating system, and these devices only allow compatible third-party apps to be installed from the Chrome App Store. However, considering their popularity in educational institutions, they’re becoming a serious target for cybercriminals who want to hack heavily secured networks. Any website can tell what device you’re browsing from and Chromebooks make you an obvious target. It’s vital that you have the proper defenses to avoid becoming a hacking victim.

Like Android, Chromebook takes advantage of Google’s proprietary security measures, including the built-in download scanning in Google Drive and Google Chrome. But Google’s Play Protect has previously allowed hundreds of trojan-infested malware onto the Play Store, so there’s plenty of reason to be suspicious about how effective it really is.

Google’s proprietary security measures should be able to detect plenty of viruses, malware, and rootkits, and the built-in sandboxing helps prevent viruses from spreading between apps.

However, there’s also plenty that it cannot protect against, like the enormous variety of phishing, man-in-the-middle, and social engineering attacks that exist—all hoping to deceive you into surrendering your credit card details or providing documentation that could lead to the loss of your identity. Yes, Chrome includes some built-in protection that should flag these URLs. But as history demonstrates, its protection does not compare to a dedicated security provider whose security analysts make sure that vulnerabilities are patched.

And Here’s What You Can Use Instead

Rather than relying exclusively on Google’s built-in mechanisms for scanning online files and links, there are quite a few strong options on the market. Some of my favorites include:

Avira: Avira is another good option, particularly for those concerned with detecting and removing malware. It provides an entire suite of Google Chrome web extensions, including Avira Browser Safety,  Avira SafeSearch Plus, Avira Phantom VPN (a free VPN tool), and Avira Password Manager. By using all these tools simultaneously, you can diversify your Chromebook’s protective features beyond what Google offers.

Bitdefender: One of Google’s nicest features is how easily everything is synced across devices. If you’re a Chromebook user, it’s probably not the only device that you operate. Bitdefender has excellent scanning options, deep behavioral monitoring, and additional features like multi-protocol secure file shredding. If you subscribe to Bitdefender on a Windows computer, you can use its Chrome extension to keep your Chromebook protected, too.

Antivirus Online Scanner:  If you want a Chrome-specific tool, consider this option. This extension uses the combined power of over 40 scanning engines to check online files and attachments for viruses, allowing you to leverage the scanning power of AVG, Avast, Avira, and Bitdefender (among other providers) to keep your device safe.

Don’t Put Your Trust in Google

I love Chromebooks and think that Google does some amazing things—like including some of the best built-in security on the personal computing market. But I wouldn’t recommend relying upon their built-in mechanisms. The risks are too great, so give your Chromebook all the protection it needs to avoid viruses, malware, and scams.

Eric C.
Eric is a professional cyber tech expert with almost a decade of experience writing about security and tech. In recent years, he has been focused heavily on the rapidly developing fintech and cryptocurrency industries and how they relate to online security.
978 209