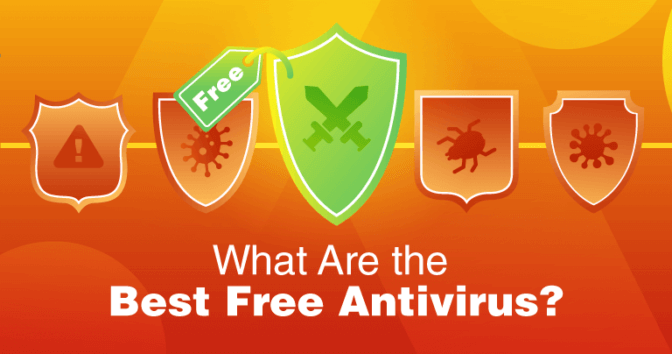 Finding an antivirus that’s actually free is difficult. Many “free” antivirus programs are just unsecured premium versions, leaving you widely exposed to malware. And many deceptive online reviewers include “free trials” as part of their lists of free products. But once the trial is over, you’ll need to pay.

The truth is, no free antivirus software, not even the ones on my list, will 100% protect your device from cyberattacks. However, some free antivirus software can act as a decent layer of protection if you don’t need a high level of security. Personally, I carry a lot of sensitive data on each one of my devices, so I always use a low-cost premium antivirus and skip the hassle of using a free antivirus.

That said, I’ve thoroughly tested over 43 free antivirus software for virus and malware protection, internet security, and additional features. While most of them were pretty bad, I found a few that actually worked pretty well.

Short on time? Here’s a summary of the best (REALLY FREE) antivirus software for 2020:

How I Rated the Best Free Antivirus for 2020:

Many brands offer free versions or free trials of their paid software. But oftentimes, the free version fails to provide any decent cybersecurity protection — adding nothing of value to my device’s built-in security tools (like Windows Defender and Apple’s native security system). When trying a range of free antivirus programs, I was surprised that many well-known brands offered pretty bad free antiviruses.

Avira is the best free Windows antivirus for many reasons. For starters, it has all the necessary security features like:

I was really impressed with the scanning engine, which is backed by the Avira Protection Cloud — Avira’s cloud-based malware database (updated every day). Both the Quick Scan and the Computer Scan are fast and thorough — Avira detected 100% of the malware samples that I downloaded onto my PC — instantly removing them to quarantine or blocking them when I tried to run them. One downside to the antivirus scanner is that I have to pay to access USB scanning — it would be great if Avira included this with their free software.

Avira also offers an antivirus scan scheduler, a firewall, a free VPN, and an Activity tab that shows the results of each scan. Avira Phantom VPN includes 500 MB of free data every month. Although this isn’t a huge amount — not enough for me to binge-stream Netflix — it’s great for anyone occasionally using public Wi-Fi connections. The VPN isn’t super fast, unlike Bitdefender’s Premium VPN, and it doesn’t allow you to choose server location. It’s not the best antivirus with a VPN, but it’s all 100% free and works pretty well.

Overall, Avira’s free antivirus package for Windows is great. The antivirus scanning engine, backed by Avira’s Protection Cloud, is fast, thorough, and scored a 100% detection rate in my testing. I also love that Avira offers free real-time protection and a free VPN. Although the VPN isn’t as good as some others, it’s great for people who occasionally use public Wi-Fi connections.

Avira for Mac is just as good as it is for Windows. There’s a range of free features, including:

My Avira Mac scan was equally as fast as my Avira PC scan, taking under 90 minutes to complete. During the scan, it detected all of the malware files installed on my Mac, and it stopped me from launching malicious ‘.dmg’ files — instantly moving them to the quarantine folder. Again, the one minor downside to Avira Free for Mac is that I need to upgrade to access USB scanning, so I can’t ensure my external drives are malware-free unless I pay.

I like how Avira includes an integrated Mac firewall in its free software. Still, it’s pretty basic in terms of functionality in comparison to the firewall included in the best premium antivirus for Mac — Intego.

The Phantom VPN offers 500 MB of free data per month for Mac users, too. It’s super easy to use, and I love how I was able to customize the interface. The VPN wasn’t super quick in my tests for Mac either, but it was good enough for me to check my Facebook and email when using my Macbook in an internet café.

Avira’s free “Optimizer” — which comes as a separate app — is a really good Mac cleaning tool. Its initial device scan was super fast, and it found a huge number of junk files (almost 3 GB), which I could then remove from my hard drive. Optimizer’s layout is really clean and straightforward to navigate, and it’s a nice addition to Avira’s free product range.

Avira for macOS is the best free Mac antivirus for most people. I love the range of features and additional free apps that help with Mac optimization. The fact that Avira offers real-time protection for free is the biggest selling point for me. Although the VPN isn’t as good as other paid VPNs, it’s good enough for me to check social media while protecting my Macbook’s data when I’m on public Wi-Fi.

I love Bitdefender’s free Android app because it’s straightforward to use and offers a high level of protection.

It’s super easy to navigate, with a clean and simple layout — perfect for new antivirus users. The app has a great malware scanner that detected all of the malware apps and sample files that I installed on my Android during testing.

The true beauty of Bitdefender’s Android app is that once I’d scanned my phone for malware, I didn’t need to scan it again — thanks to the Autopilot feature. Autopilot scans all new apps and downloads for viruses and malware in real-time.

I also love how lightweight the app is — it uses cloud-based technology to reduce battery and CPU consumption while also protecting my phone against the latest malware threats.

While other apps offer a wide range of features, I like how Bitdefender’s Antivirus Free app is both super simple and offers powerful malware protection. I would like to see the company offer a couple of other free features with the Antivirus Free app, such as Wi-Fi security scanning and a VPN. However, they do provide these features as part of their paid Mobile Security app — which you can try during a free trial.

Bitdefender’s Antivirus Free is super easy to use, lightweight, and offers powerful malware protection. Having real-time malware protection with the Autopilot feature gives me peace of mind — knowing that all of my newly downloaded apps and files are safe. While I’d like to see some additional free features within the app, I’m very happy with the level of protection that Bitdefender’s Antivirus Free offers.

Avira Mobile Security isn’t an antivirus app per se — it doesn’t scan your iOS device for malware (because Apple doesn’t allow it). However, it does offer a powerful range of free cybersecurity tools for your iOS device. Its layout is nice and easy to use — like all other Avira products.

Anti-Theft is super easy to set up, and I love how I can view the location of multiple devices, including my Macbook and iPhone, all from the Avira Connect online dashboard.

My favorite feature is the Privacy Manager. It enabled me to download a “profile” that blocked my Siri voice command data and location data from being sent to Apple’s servers for analysis. Privacy is something I genuinely care about, so this feature made me feel safe when using Siri — which I’d avoided previously due to privacy concerns.

Network Scanner told me exactly who was using my Wi-Fi network, and I was reassured to find that no one was using my Wi-Fi without permission. Device Analyzer displayed exactly how my iPhone’s storage and memory were being used. While this feature seems good, it doesn’t actually allow me to see which apps were taking up the most amount of storage or memory, and I couldn’t do anything with the information it gave me.

Avira also offers a separate iOS app for its free Phantom VPN — which is just as good as its VPN for Windows and Mac.

Identity protection and web protection tools are only on the paid Avira apps. I was slightly disappointed to see this, as many other free antivirus apps, such as TotalAV and Kaspersky, offer these tools — or at least a limited version — for free. That said, the cost of upgrading to the full version of Avira Mobile Security is very inexpensive.

Avira’s iOS app is my favorite free iOS antivirus due to the range of free features and its clean, easy-to-use design. While features like Device Analyzer seem a bit pointless, Privacy Manager is a standout feature that fully protects my data from being sent to Apple’s server — giving me peace of mind when using Siri. I was slightly disappointed that I had to upgrade to access the identity protection and web protection tools. However, the cost of upgrading is very minimal. 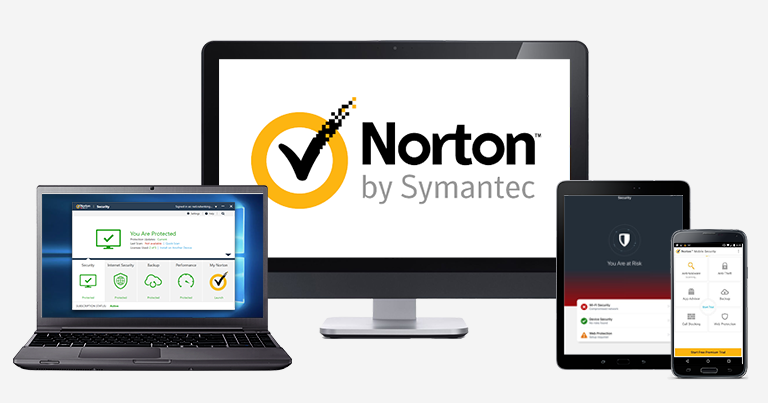 Free antiviruses are great if I didn’t have a lot of sensitive data on my phone. But I do my online shopping on my iPhone, all of my professional work is on my Macbook, I game on my PC, and I store tons of photos on my Android. I will never be able to fully protect all of these devices with a series of free antiviruses.

Dealing with the limitations of a free antivirus isn’t worth the few bucks a month that a Norton 360 subscription gives me.

There are many reasons why I use Norton’s paid antivirus:

Unfortunately, Norton doesn’t have a free version of their software, but there is a 30-day money-back guarantee on all of its 360 packages.

Check out our full, in-depth Norton review over here.

Norton’s 360 antivirus packages offer the best protection out of any antivirus on the market in 2020. Apart from the powerful security features, additional features such as an unlimited VPN, parental controls, and cloud-based storage can’t be offered by a free antivirus. Norton is without question the best antivirus for most people, especially those with PCs. If you’re a Mac user, Norton is still good, but I’d recommend you instead take a look at Intego’s Mac-only antivirus.

🤔️ Is a free antivirus going to keep me protected from malware?

Yes and no. All the free antivirus software listed here will give you a good basic level of security. But if you’re looking for anything other than simple malware scanning and real-time threat protection, you’re going to need something more advanced, like a low-cost premium antivirus.

🤔 Are there any free antiviruses without ads?

There are, but companies need to make money somehow. If they aren’t showing you ads, they’re probably limiting features with the hope that you’ll purchase a premium upgrade. And that’s the best case scenario! Many times, antivirus companies sell their free users’ data to large businesses, and that could potentially compromise your security.

My favorite ad-free antivirus is Bitdefender. It’s simple, effective, and there aren’t any ads. Avira also doesn’t have ads, but the company is a bit more obvious about trying to get you to upgrade to the paid version. Still, both of these apps are two of the best free antiviruses on the market.

🤔 Which is the best free antivirus for me?

For more information on the best free antiviruses of 2020, check out our top free recommendations for:

Sophie Anderson has spent the last 10 years working as a software engineer for some of the biggest tech companies in Silicon Valley. She now works as a cybersecurity consultant and tech journalist, helping everyday netizens understand how to stay safe and protected in an online world.
978 387