Home Blog 5 Best (REALLY FREE) iPad & iPhone Antivirus Apps in 2020
Transparency and Trust – We pride ourselves on being the only site where users can freely contribute and share their reviews on any antivirus with other community members. When you visit an antivirus site we link to, we sometimes get affiliate commissions that support our work. Read more about how we operate. 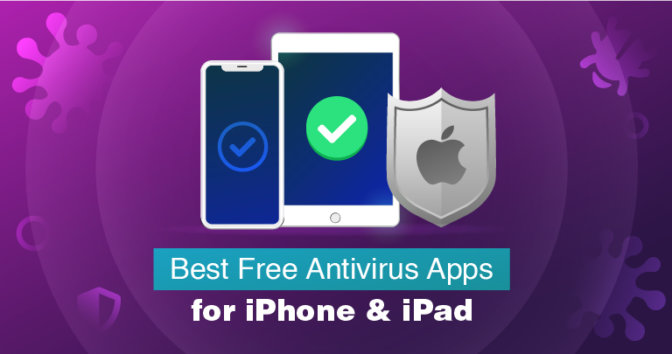 Here’s a fact most antivirus companies don’t want to tell you:

Apple banned developers from publishing apps that claim to scan your iPhone for malware. This is because iPhone apps are “sandboxed”, meaning they can’t access data from other apps (with very limited exceptions).

BUT… When most experts say “antivirus” for iOS, they mean protection against other dangerous threats that require you to install an antivirus app like:

So iPhone and iOS “antivirus” apps don’t really detect “viruses”, but iOS “viruses” will still hack your passwords and steal your identity. That’s why it’s essential to have an antivirus to protect against all of these other cybersecurity threats.

Short on time? Here’s a summary of the best free iOS antivirus apps 2020:

It’s important to keep in mind that none of these free apps will guarantee your protection the way that paid iOS antivirus apps will. If you’re looking for advanced antivirus protection for iOS and you understand that your data and your privacy are worth more than 2-3 dollars per month, check out Norton’s fantastic iOS app.

I tested every iOS app out there and came up with the 5 best free antivirus apps that will offer your iPhone and iPad a pretty good level of protection for absolutely no money.

How I Ranked the Best Free iOS Antivirus Apps:

Here are the qualities I expect from an iPhone antivirus app before it can earn a place in my top 5: 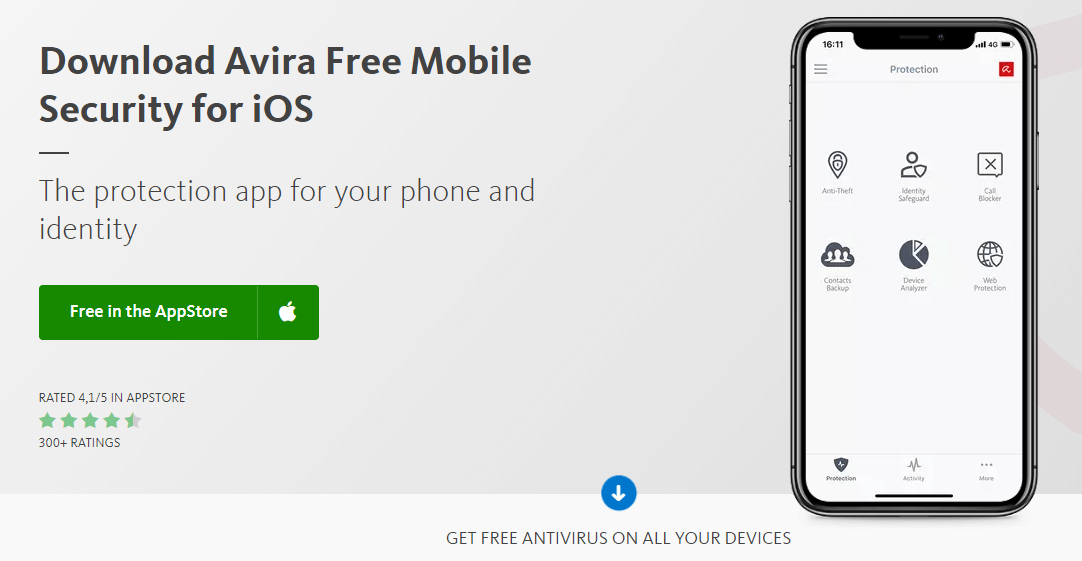 Avira Mobile Security provides a great range of features — in fact, it offers more features than any other free antivirus app for iPhone or iPad.

I use my iPhone for shopping and banking all the time, so it’s important to make sure that I’m not visiting phishing websites which are designed to steal my personal information. I tried going to several known phishing sites and Avira Mobile Security’s Web Protection feature prevented me from visiting all of these fake websites.

Avira’s free iPhone app also includes access to an online dashboard — Avira Connect. If my phone ever gets lost or stolen, I can log into Avira Connect from another device to use Avira’s anti-theft tools. I tested this integration with my computer, and I was able to do a lot of different things from this dashboard like track my phone and send out an alert, and also download other free apps from Avira.

It’s also worth checking out a couple of Avira’s other free iPhone cybersecurity apps, including:

And Avira’s premium antivirus is one of the best antiviruses on the market, including professional protection for iOS (and 4 other devices on the same plan). Take a look at the full, in-depth Avira review over here. And there’s a great deal going on now with this 40% off Avira discount!

Avira Mobile Security’s wide range of features make it the most versatile free antivirus app on iPhone. Its anti-phishing technology is particularly impressive. Combining Avira Mobile Security with Avira’s other free apps, including Avira Phantom VPN and Avira Password Manager, will give you the ultimate range of free security and optimization features. 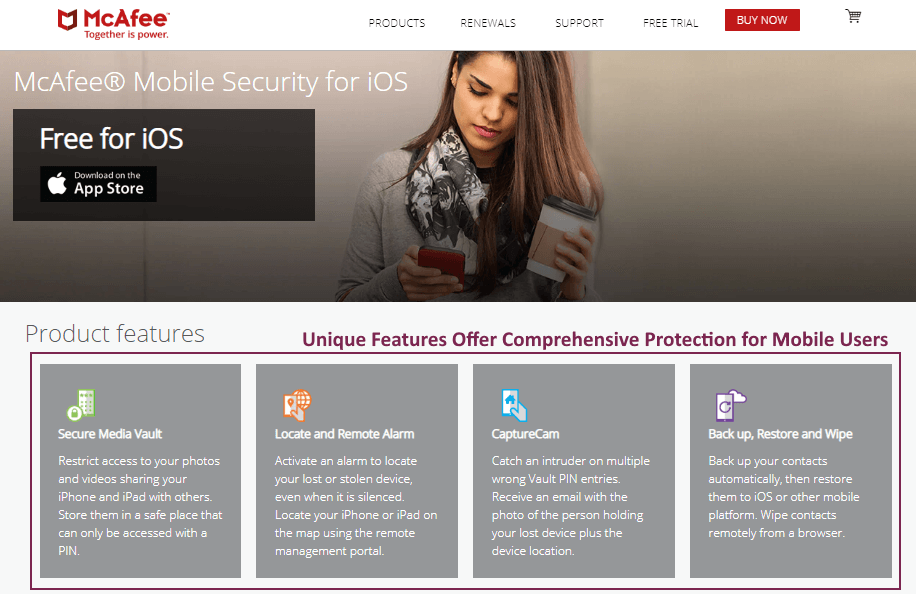 McAfee is a household name in the antivirus world, and just like their premium antivirus, their free iOS app is very high quality. McAfee Mobile Security includes 2 phone location features to help you find your lost or stolen iPhone. I was able to access both of these by logging into my free McAfee account on another device (including my Apple Watch!).

I tried the Remote Alarm with my iPhone on “silent” mode, and it made an incredibly loud noise. I also liked the Locate feature which showed me the current location of my iPhone on a map. These two things are nice to have, but these are already standard features on Apple’s default Find My iOS app.

I intentionally entered my PIN wrong three times on my iPad, and McAfee’s CaptureCam feature took a photo of me using the iPad’s front camera. McAfee then sent me an email of the picture along with the last known location of the device.

What’s even cooler is if someone does manage to break into your iPhone, the Media Vault feature provides an extra layer of protection for your photos and videos. Media Vault encrypts your device’s media and secures it behind an additional PIN. I set it up to automatically save new photos and videos to my Media Vault.

McAfee Mobile Security’s anti-theft features are highly impressive. The app can locate your iPhone, protect your photos, and wipe your contact data. McAfee also ensures you’re always connected to a secure Wi-Fi network, so there’s little chance that anyone will be able to spy on you.

I transmit sensitive, personal, and financial information via my iPhone every day. I check my bank account, I order food with my credit card, I send emails, I log into social media… My phone knows a lot about me. And this data is at risk unless I actively take steps to protect it. Phone Guardian focuses on protecting my outbound network traffic — the data leaving from my device.

Phone Guardian uses a Virtual Private Network (VPN) to ensure my phone is always connected to a secure network. The VPN also encrypts the data leaving my phone and reroutes my network traffic through a different, secure server. Even if someone does intercept my data, they won’t be able to read it.

Because the app is free, Phone Guardian makes money by doing something similar: Collecting data about app usage and selling it for market research purposes. Privacy-conscious users should be aware of this — although the data that Phone Guardian collects is anonymized, so it won’t be sold to advertisers. This is an important distinction, but if you want a VPN that doesn’t do this, you’ll need to get a premium VPN.

Phone Guardian provides a fast and free VPN to keep your network traffic private. Using a VPN is important if you frequently connect to public Wi-Fi networks. Phone Guardian also helps you understand how data-hungry apps use your personal information. And while Phone Guardian also collects data from your device, it’s all anonymized, which is something that other free VPNs don’t do. 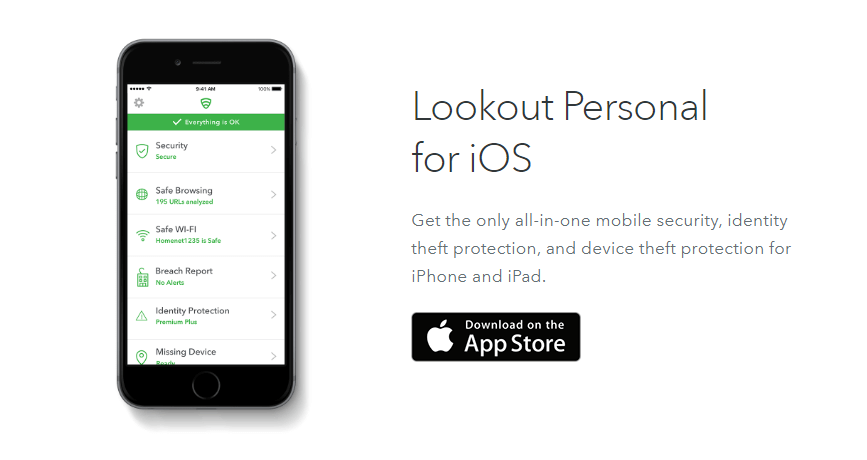 Lookout Personal for iOS offers some nice free phone-locating features that builds on Apple’s default Find My app. I tested the Locate feature by putting it in my friend’s car and having him drive really fast. I followed the phone’s exact location as I talked with him on the phone, and the map was 100% accurate. Then I tested the Scream feature (which I told him I would do), and it was so loud that it startled him!

Lookout’s Lost Message feature then sent out a message which had a short text on the lock screen with my contact details saying how I was looking for my phone. If my friend didn’t have it, a helpful stranger could’ve found it and returned it back to me.

These features are great, but what if your battery dies before you get a chance to use them? I purposely drained my battery and tested Lookout’s Signal Flare feature. It sent me an email telling me my phone’s last-known location.

Then there’s “Theft Alerts”, which is designed to detect suspicious activity on the phone. I entered my PIN incorrectly several times, tried turn off my phone, and then tried to remove the SIM card. Lookout took a photo from my front camera, and emailed it to me along with my phone’s last known location.

Note: You can choose which activities will trigger Theft Alerts — after all, you might not want to receive a Theft Alert every time you turn your phone off.

Lookout Personal for iOS is a good choice if (like me) you frequently misplace your phone in public. In fact, I really think it’s the best iOS app for recovering lost iPhones and iPads — and the anti-theft features will also help if your phone gets stolen. But the theft protection is not as strong as others on this list like McAfee.

Avast’s iOS offering is pretty good overall, but I really like the Identity Guard feature, which will notify you if your personal information gets leaked online. While this is nice, it only protects 1 email address on the free plan, and regular premium antiviruses like McAfee and Norton do this better for cheaper.

But one thing I did appreciate was Avast’s Wi-Fi Security feature. This automatically checked all of my Wi-Fi connections for vulnerabilities. It told me about:

This feature is important if you travel a lot like me and often connect to a lot of unknown Wi-Fi networks.

The app also includes a Photo Vault which gave me an extra layer of security to the media stored on my devices. I keep all of my galleries locked up behind an additional PIN (not the same PIN!), so even if someone does break into my iPhone or iPad, they won’t be able to view my photos and videos.

📱 Do I really need an antivirus for my iPhone?

Apple is right when they say you don’t need an antivirus for your iOS device. And they’re also completely wrong. “Antivirus” is the wrong word to use because these apps are not really detecting viruses. But Apple’s built-in security measures can’t protect us from our own browsing habits. Phishing is a huge problem, theft is a huge problem, and browsing on unsecured networks is a huge problem.

For me, there’s really no reason not to install an antivirus app like Avira or McAfee on my iPhone. Not only are our iPhones valuable assets, they also contains some of our most sensitive personal information.

✔️ Will iPhone antivirus apps work on my iPad?

In most cases, yes. iOS antivirus apps, like Avira, will work for most iOS devices, including iPads. But still, you should check with each product to make sure that the app offers the protection you want. There may be certain features which will only work on iPhones.

🛡️ What kind of antivirus features do I need to stay protected?

Again, “antivirus” is a weird word for Apple products. While the threat of a traditional virus is low, there are all sorts of other threats that will compromise your cybersecurity.

If you really care about keeping your iPhone secure, check out SafetyDetectives’s best premium antivirus apps for iOS in 2020:

Robert Bateman
Robert is an expert in privacy, data protection, and cyber-security. He specializes in helping people and businesses keep their devices safe and their personal information private.
978 188 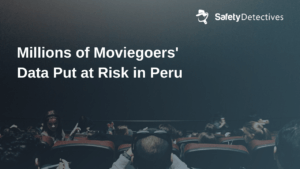