Home Best Antivirus Programs ClamWin Reviews
Transparency and Trust – We pride ourselves on being the only site where users can freely contribute and share their reviews on any antivirus with other community members. When you visit an antivirus site we link to, we sometimes get affiliate commissions that support our work. Read more about how we operate.

ClamWin Antivirus Review 2020 - What They Won't Tell You

Antivirus protection doesn’t have to cost a fortune (or anything at all!). ClamWin protects Windows machines using an open source engine. While bells and whistles are certainly lacking, it provides enough features (and an active enough user-base) to make this a viable solution for those with basic needs.

Many know that ClamWin is a free and open-source (FOSS) antivirus solution for Windows that serves as a front-end to the open-source ClamAV scanning agent. It integrates easily with Microsoft Outlook and Window Explorer and boasts over 600,000 users worldwide. But what you may not know is that it has a few drawbacks, such as no real-time protection. We'll take a look at whether this antivirus is worth the hype. 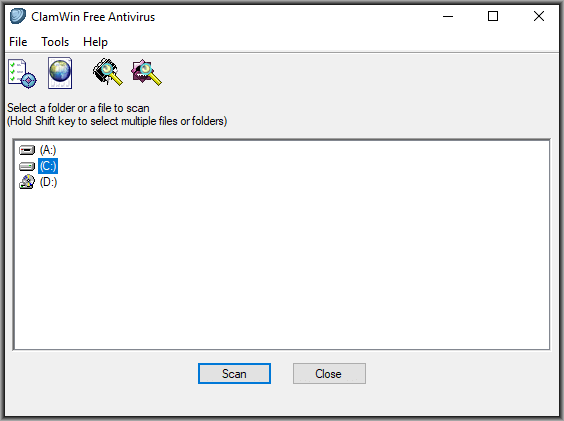 ClamWin draws its antivirus definitions from the ClamAV database. ClamAV is a cross-platform, open-source antivirus engine that also powers the most well-known antivirus tool for Linux desktops.

Because ClamWin is drawing on an open-source engine, there are some obvious drawbacks.  For one, the program lacks real-time protection, which is particularly important for guarding against so-called zero-day attacks (vulnerabilities which haven’t been noted and patched yet). The engine also doesn’t have the financial backing of a user-base with which to employ cybersecurity specialists to look out for emerging threats in user-submitted code samples. There’s no "ClamWin Lab" on the lookout for threats.

Despite these drawbacks, however, the definitions database is updated several times a day, and the program features a sufficient number of scanning options to protect against the majority of viruses, pieces of malware, and trojans that may be lurking in your files and directories. 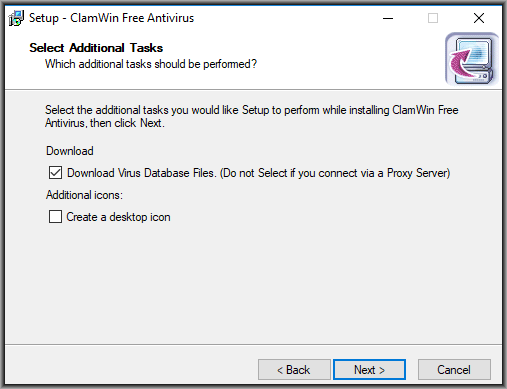 While the program doesn’t feature something fancy like a virtualized sandboxing environment for quarantining files, it does append a .infected to the end of files that it has found to be dangerous to prevent them from executing and can move those files to a quarantine folder of the user’s choosing. This gives users some level of assurance that identified viruses will be prevented from wreaking havoc on their system although it’s not as sophisticated as the safeguarding methodologies employed in paid solutions.

ClamWin also includes the ability to both execute system scans on demand as well to schedule scans to run at predetermined times. You can also run a "memory scan" which will only run through programs currently running in the system memory. 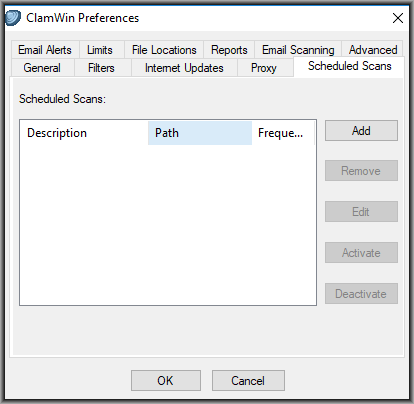 To speed up the scanning process and prevent the scanning of directories known to be safe, it’s also possible to configure filters to prevent the program from scanning certain filetypes or locations as well as enforce file size scanning limits. What’s missing, of course, is the ability to scan files as soon as they are opened. This means that while the protection offered should be good enough to catch mature viruses that volunteers have identified and inputted to the ClamAV engine, it’s unlikely to prevent emerging threats as well as more sophisticated attack vectors like rootkits.

Additionally, scheduled scanning can only be configured on a per-drive basis. If you want to do something more comprehensive—such as scan your entire system, and several attached virtual drives all at once—you’re going to be better off using a more mature program.

In addition to its scanning options, ClamWin includes some nice features which boost its utility for Windows users.

They include the following:

ClamWin can integrate directly into the Microsoft Outlook email client as well as Windows Explorer. This makes it easy to send individual files, folders, and email attachments for inspection.

If ClamWin finds a malicious program to be running within the system memory, it can forcibly unload it.

ClamWin is an easy program to set up and to run. To download it, users can obtain the executable from SourceForge. After accepting an EULA, the program is installed and ready to use. 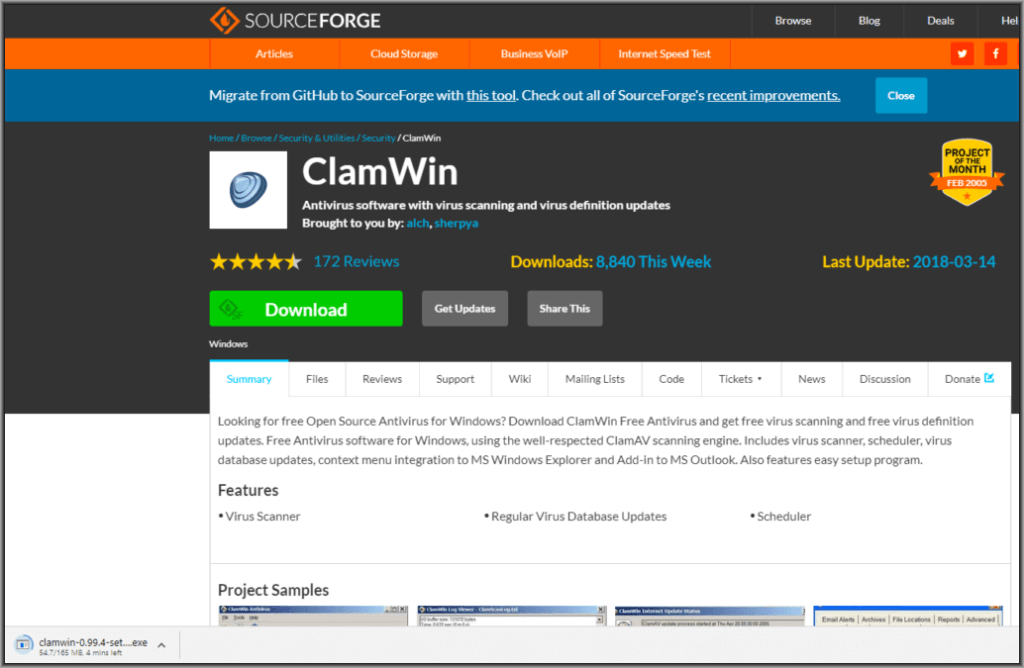 The program has a relatively basic feel, but on the plus side, it is easy to navigate around the menus. The settings screens let users configure scheduled scans, adjust filters, and configure scanning rules for the integration with Microsoft Outlook. It’s also easy to change the frequency of received updates and view the results of completed scans.

Given that ClamWin is free and open source software (FOSS), support is limited to online support forums. Thankfully—despite the program’s age—these remain relatively active and well populated. Although the program’s volunteer developers do occasionally respond to threads, it’s pure luck as to whether or not the community will be able to resolve your issue.

Nothing to complain about here! ClamWin is totally free. 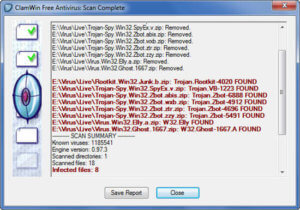 ClamWin remains an important program for users that want to get basic antivirus protection without forking out any dollars. I liked the fact that its antivirus definitions are updated several times per day and that it still retains an active user community. Those in need of real-time protection and more sophisticated features are certainly better off looking elsewhere, but as a free add-on to your main antivirus solution, or a standalone program for low-importance machines, it remains a viable option. 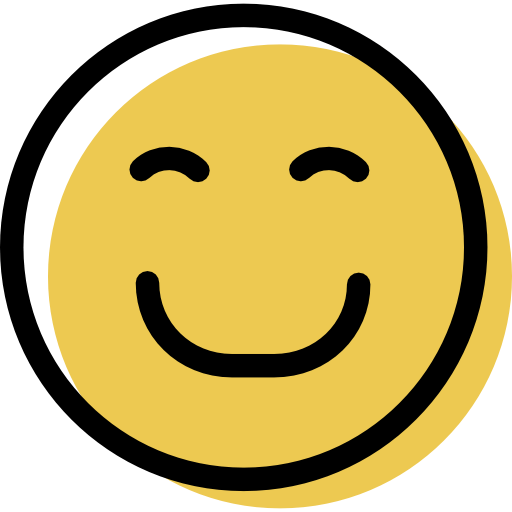 Just fine if used alongside a few more apps listed below

Mac User
ClamWin is a good enough antivir. solution for carefully-managed Win7 systems. Install MSE and set it to work as the default anti-spyware barrier instead of the older WinDefender that comes with Win7, and set up a weekly, scheduled scan with ClamWin - and you have a no-fuss solution to Win7 computing. Also don't forget to run Firefox and load it up with AdBlockPlus and PrivacyBadger - instead of running the default IE browser - and with careful browsing you should be fine. Also recommended is Sylpheed for your email needs - no html support which is good - if you get an html email simply click and it opens in your web browser. Safe computing is often bare-bones computing. On Win10 the built-in WinDefender is just fine for basic antivir. need...Show More
s - for browsers, recommended is the default Edge browser with AdBlockPlus installed or Firefox with the extensions listed above. Safe computing to all.
Less
Visit ClamWin Reply Share
Feb. 11, 2019

40 minutes and 100% false findings - Nothing has changed.

Windows User
For many years, ClamWin has been plagued by false positive "finds" and vast numbers of skipped files. I had the experience of Clamwin finding malware missed by the two top rated programs, but that was many years ago. I just terminated a CW scan with 18 false positives and no true findings, about an hour ago. Several of the false findings were on programs that I had previous false findings at least 4 - 5 years ago. I reported them to CW. They were not fixed. I had abandoned CW several years back for the false positives and large number of skipped files. At this time, I am restrained from giving a zeo score by the scoring system. In my experience, ClamWin does not rise above useless.
Visit ClamWin Reply Share
Write Review