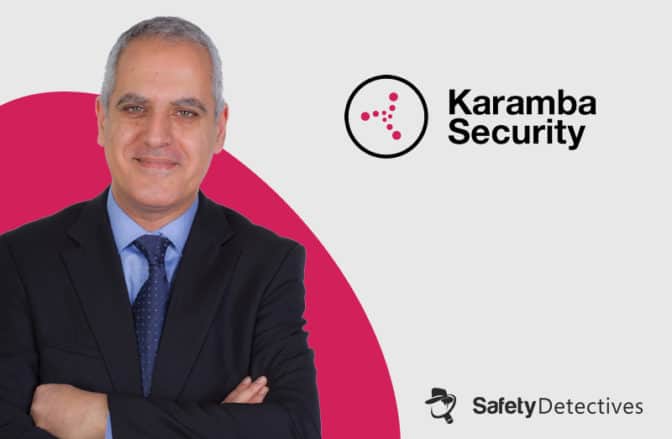 With many thanks to David Barzilai, Executive Chairman & Co-Founder of Karamba, Aviva Zacks of Safety Detective had the opportunity to learn about how IoT in the auto industry was just the jumping-off point for his company.

Safety Detective: What motivated you to start Karamba?

David Barzilai: A tier-one vendor in the automotive industry didn’t win a project due to the lack of cybersecurity, and he directed our attention to it. We realized that the automotive cybersecurity was an emerging topic, and the approaches to it were to look at the car as a data center on wheels.

The problems were that it was prone to false positives, it required continuous updates like antivirus on our laptops, and the car couldn’t accommodate such frequent updates or tolerate false positives. So, we came up with a solution for IoT. We had realized the car was an array of IoT devices, so we just considered it to be an IoT security problem.

We identified a need, came up with something much simpler to grasp by the end customer, and then we expanded it to offer it to all IoT markets, not just automotive.

SD: What would you say is your flagship product?

DB: The flagship product is called XGuard. It is applied to the device software without requiring any change from the developers of that software, and it performs runtime integrity on the device as well as continuous visibility into the device parameters for continuous monitoring of suspicious attack behaviors or events on that device.

SD: Do you only work with automotive or do you work with other verticals also?

DB: We started with automotive, and now we work with other verticals. We started selling at the beginning of 2019, and after one year, we announced that we had contracts to secure over 1 million endpoints. And now, despite COVID-19, we have announced that we have contracts to secure over 12 million devices, and the markets that we cover are automotive, industrial IoT, the enterprise EDGE, as well as the energy sector.

SD: How do you stay ahead of the competition? Is that you have such a unique product or are there other companies doing the same thing as you?

DB: There are other companies doing or trying to do the same thing as us. What we have found to be the core differentiators is multi-faceted. The first one is the seamless integration—integrating our security software into the device without having the need to involve or to interfere with the R&D process of their device nor to change anything with regards to the supply chain. Things are done as they should or as they have done before us. And we are being integrated into the firmware seamlessly just before QA as part of the streamlining of the software, creating one object from the multiple binaries.

And the third thing is our coverage. We are OS and CPU agnostic. IoT devices can vary on multiple hardware architectures, CPU, and multiple operating systems. By the end of the day, we support seven CPU architectures and 12 operating systems. The competition is trying to chase Karamba, but the biggest barriers are the integration phases that are very tedious and lengthy as well as the footprint on the device.

Enterprises try to profile normal behavior and deviations from IoT devices by listening to and analyzing network traffic. However, such data is limited by scope and visibility. As such, customers require manufacturers to protect their devices. Regulators follow suit, with recently ratified standards in the IoT and automotive verticals.

SD: What do you think are the worst cyberthreats today?

DB: From our point of view, the problem with IoT devices is that they are blind spots for the enterprise. You cannot run your endpoint security antivirus on the device, you cannot run them after the fact, and hackers have learned that and they are trying to penetrate and to infiltrate into the enterprise via those IoT devices that are somewhat naked.

Aviva Zacks is a content manager, writer, editor, and really good baker. When she's not working, she enjoys reading on her porch swing with a cup of decaf.
978 354